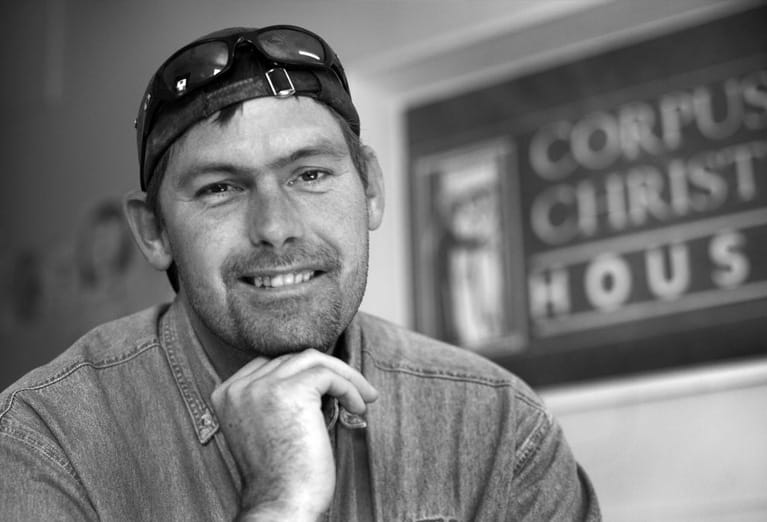 I spoke with Charles in an office amid the incredible activity that is Corpus Christi House*. We were interrupted more than a few times by people who wanted help from “Chuck.” He truly is their go-to-guy. As he should, Charles takes great pride in what he has achieved. He gives me hope.

Growing up in Memphis was great. My father and mother were divorced. I hardly ever saw my father. My mother did the best she could to take care of us. My dad didn’t pay child support so we grew up very poor. Her step father was homeless so that’s how I got to know homeless people. When I got into music, I was feeding them on Saturday and Sunday in the park there in Memphis. I had family in Texas I’d go visit. My grandfather was one of the biggest inspirations of my life. He was the one who maintained the honesty in my life. The first band I got together was named Sidewinder because that was his CB handle. That and you never know which way a sidewinder is going to hit. We played heavy metal. What is called classic rock now was called heavy metal then.

Back then Memphis was a tourist attraction. It has Bill Street which was the home of the blues and Tom Lee Park which was where they would hold music festivals. There was Mud Island Amphitheater. That was where I played my last show. Sun Records is there. It’s a museum now. You can go there and see where greats like Elvis and Johnny Cash recorded. My mom was in love with Elvis. We used to go to Graceland. The most impressive thing about Graceland was Elvis’ trophy room. I have a picture of me sitting in the cockpit of his plane, the Lisa Marie. I missed my dad but my mother did the best she could to support us. Even if that meant eating potatoes and beans, she got us what we needed.

I bought my mother the first house she ever owned when I was 17. I paid my way through private school by playing music. I could get a better education there. The public school system in Memphis is so congested. It got to where I provided for my mother and my younger sister. After I got into music and heavy into drugs my sister acted as a kind of nurse for me. She still lives in that area. I still talk to her but I can’t go back to Tennessee.

I was married in ’92 when I was 18 years old and we got divorced when I was 22. I just put her through so much hell because of all the drugs and alcohol and being out on tour all the time. I loved her so much I wanted her to be able to get what she gives or to find someone that could love her as much as she loves. We’re still friends. Her father helped me out even long after we were divorced. He was a good man even up to the day he died.

My drugs of choice were alcohol and meth. It got to where I was shooting dope so much I was staying awake sometimes two or three weeks at a time. I’d drink and take pills or smoke pot just to get to sleep. My oldest daughter was born when I was 15. When my younger daughter was born in 2003, I’d gotten away from drugs but still drank alcohol. I tried to be with my youngest, but I started to get back into my old habits. I had to get away from Tennessee and she stopped talking to me. Then, out of the blue last week she called me. We’ve been talking and texting since then. She turns 11 the 18th of [October]. She still lives in the Tennessee area. She wants to come up to Boise this summer. I should have my own place by then.

I moved to Idaho in 2003 to work at the Sonic Drive-in. My ex father-in-law trained me to be a GM in Blackfoot. Soon they wanted me to take over the Sonic up on Overland in Boise. I’d kicked the drugs but still maintained drinking alcohol. I drank so much, I ended up getting caught drinking at work and they fired me. I lost everything. I knew a couple of people who were homeless and we used to drink together down in the park. They told me about Sanctuary and so I decided to go stay there. I still continued to drink for a while. But the staff at Sanctuary stuck by me. They knew I was a hard worker.

I ended up getting into trouble. When I got out of jail my probation officer told me I had to go back to Sanctuary. The staff knew I was trying to stay sober and they still stuck behind me. They gave me a bed if I came in sober. I told them I was trying to get my life back together and they helped me. Now I’ve been sober for almost two years.

Now I’m working to be what’s called a peer specialist. I live at [Corpus Christi] and support any alcoholics or addicts who want to change their lives. We help connect people with resources to get housing, and work and whatever they need. I want to be able to give back. I’ve always enjoyed helping people.

Being homeless is a very tough life. Of course we don’t always have the winter gear we need. This fall we haven’t got enough jackets. Being homeless doesn’t mean you’re bad. There are people who are trying to get out of this life but they don’t know what resources are out there to help them. It feels great to get your life back together and go a complete different direction. Now I want to be able to help people. I got so caught up in drugs and alcohol I forgot to help. I forgot where I came from because as a kid growing up, I was one step away from being homeless.

*Corpus Christi House in Boise, Idaho is a homeless day shelter that comes out of the tradition of Dorothy Day and her Catholic Worker movement and has expanded with participation and support from local churches of various denominations.