The Night of the Two Sarahs

Sarah McFeeley and Sarah Christianson are a force of nature. They are known throughout Sanctuary as the two Sarahs. They have volunteered just about every Monday night for the last two years. Everyone, from guests to management, thinks extremely highly of them. Both were a joy to talk with and their obvious passion for helping people was infectious.

In this article, when a given Sarah speaks, I will refer to Sarah McFeeley as “Sarah M,” and Sarah Christianson as “Sarah C.”

Why do you volunteer? 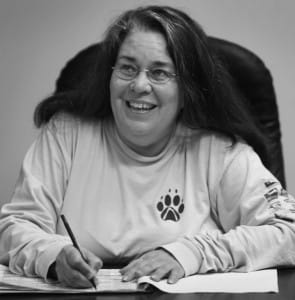 Sarah M: “I first started volunteering because of my church. I asked Dan which night they needed me the most and he said Monday. I volunteer because I figure this has as much impact as anything else that our church does. I like it when we get out into the community. I enjoy it. I’ve been doing it for four or five years. I like the contact with people, the other Sarah and the people who come through. What originally drew me to Sanctuary where all the religious faiths that are behind it. I think their needs to be more of that.” 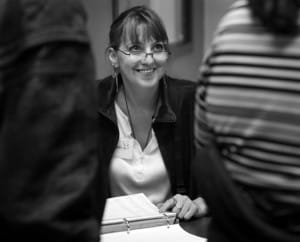 Sarah C: “I started volunteering Christmas Eve about two years ago. I volunteer because I want to do something for the community. I’ve been doing some things for the homeless since my kids were young. I wanted them to see that it could happen to anybody and I wanted them to know that you shouldn’t treat anybody differently. I like how Sanctuary treats people. I like that there aren’t so many requirements. Everybody here is as much a part of the community as anyone else. The stigma surrounding this group of people is sad.”

“What I like most about the two of them is that they’re always in a good mood. They’re always happy,” Dan said. On a nightly basis, when Sanctuary opens, guests must check in. They line up and say their name to a volunteer who checks them off of a list compiled of people who have spent the night in the past. Frankie is often that volunteer. “Frankie knows most of the residents by first name and that’s key.”

“Everything they do is totally selfless,” said Dan. “When we come in, they automatically set the place up.” The dining area in Sanctuary consists of folding picnic style tables and folding chairs that need to be put into place each night. “Frankie cleans out and sanitizes the [front] desk. She makes herself right at home,” Dan said.

Throughout the evening, guests at Sanctuary can move from inside to outside. There is an area in the parking lot where guests can visit with one another. A volunteer is assigned to watch over this area and helps where needed. Russ is usually that volunteer. “Whenever something is going on outside, Russ is always there. If I need a trash bag, I swear he is right there standing behind me. He reminds me of that guy on a construction site who is always ten steps ahead,” Dan told me. He then went on to say, “Russ and Frankie are so subtle about being the most wonderful people in the world. They provide so much more than what’s expected.”

Russ Winson and Frankie Rosera are soft spoken. They say only what they need to. It is refreshing to talk with them. As we sit in Frankie’s family home in South Boise, I feel as though I am with friends. It did not take long for me know I can trust the two folks across the circular table from me.

“My father built this house,” Frankie says. The ranch style home, built in the 1950s, is in stark contrast with the rest of the neighborhood. It is reminiscent of what seems like a more genuine time. There are large trees surrounding the Rosera’s modest piece of land bordered by a well-kept brown wooden fence. The house is partially brick, strong and sturdy. “We used to own more land. When dad sold most of it, they said there would be no multi-family homes,” Frankie says. She then points out the window toward a group of apartment buildings across the street. “They just went ahead and rezoned it, then built those,” she says.

Russ drives an old Ford pickup. I can tell this vehicle was well used over the years. The exterior has a few scratches and there may be a dent here and there. However, it is immediately apparent that like the man, this pickup has more to it than the eye can see. The engine purrs as he glides up to the front of the house without a squeak from the brakes. On entering the home, he says a quiet hello with a firm handshake.

Q: Why do you volunteer? 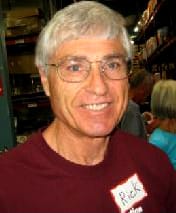 RG: “I really endorse [Sanctuary’s] approach to providing support, which is not with some specific religious goal in mind but just to help the individuals that come in. I enjoy going and having an interchange with the people there and the things I learn from them. The experiences of many who stay at the shelter differ from my own. For instance, if I was wearing a backpack downtown and the police stopped and arrested me for some reason I doubt if they’d throw my backpack in the trashcan but this is a common occurrence for people at the shelter. You do see the community from a different point of view and learn about a side of life that you didn’t know about before. I believe these folks [who stay at Sanctuary] can be much more compassionate than the general public toward other people on the street who suffer from mental problems. I’ve learned how people survive when they live on the edge. I’ve learned how the nature of our system pretty much makes people who are homeless criminals. They get cycled through the system and in many cases it’s not because they really did some horrible thing.”

“I think that in our society we tend to treat alcohol far more casually that is warranted by how deep and strong the addiction is for individuals. They recognize it and they want to get over it.”

“My theology is very much centered around social justice. I believe we have an obligation to take care of our fellow man. I attend the Boise Unitarian Universalist Fellowship. We’ve had a volunteer team [at Sanctuary] every Sunday continuously for five years.”

“There’s obviously a need. I don’t think our government does a very good job of taking care of the people who really do need assistance. They have nowhere to go and many of the guests have no capability of taking care of themselves, whether that’s due to mental illness, alcohol, drugs or combinations of all three. The Sanctuary attracts some that have fallen on hard times. They’re living paycheck to paycheck and they’ve lost their job and that gives them about a six-week window. Then they get behind, and then they’re out and then they’re on the street. Occasionally you’ll see people come in for six to seven eight months. Their food’s taken care of, their shelter’s taken care of they have a job, they can save enough money, they can make their deposit on their rentals and they can get out of there. But for the most part it’s a home. I volunteer because that fulfills a pretty important need.”

“I’m a social worker and approaching 60. I have had so many good breaks in my life that I didn’t appreciate at the time. Every time I come out of [Interfaith Sanctuary] it’s a reminder about how blessed I am. It’s almost embarrassing to talk about, like I think I deserve some kind of special attention. I don’t, I do this because I feel I must. I believe we all have a responsibility to do this. I’ve worked in the mental health field and thank God I was born without a mental health issue. I’m a richer person for doing this, the people at Sanctuary teach me things every time I go. The first time I volunteered at Sanctuary was I think about a month after they opened. We were way downtown.”

“I take so much for granted. I lost my parents at 19 and 21 and was blessed with a second family who taught me so much about how the world really works. It changed who I was and how I looked at the rest of the world. I can’t be a human with a clear conscience without giving to the community. It’s my core, my obligation to give back to people who have not had what I’ve been given.”

“I started volunteering here at the Sanctuary once a week since about December 2009. Life has been good to [my family and I] we really wanted to give back. This is the kind of place that literally keeps people from freezing to death or starving to death, it’s perfect for me. Here at the Sanctuary I feel like I can help people most at need at the most basic levels of existence. I’m a criminal defense lawyer. I see people who struggle with drug addiction, alcohol addiction, mental health problems, a lifetime of abuse, and there’s a lot of that here. I was a public defender, I’m in private practice now but I still care very much about persons who are dealing with a lot of pain and I like to help them out.”

“This place is a part of me. There have been times when my life has been stressful and I haven’t wanted to come. But no matter how rough my day is, it’s nothing compared to the day some of the people at Sanctuary have had. If I can come in for a few hours and make someone laugh, maybe give them some food I think I’ve done some good. If someone asks me, you know, how’s work going. I think I’ll talk about my practice for maybe 10 seconds then I’ll talk about what I really care about. That’s Sanctuary. I’ve missed probably a total of 10 times since I started volunteering here.”