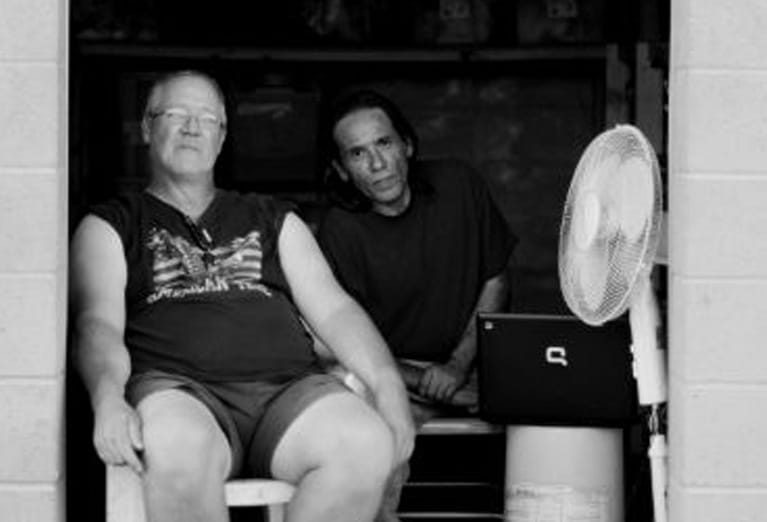 Every so often we take a chance on an experience and that chance goes on to change our lives in many ways. I am grateful to David for sharing his life with me. This is his story.

Where did you grow up?

I was born in Boone Iowa. My dad drove a soft-top Studebaker and I have fond memories of him taking me for a ride. I remember we used to go to The Ledges. They’re a little State Park just outside Boone. Rivers ran through the place but they were low enough that a car could easily drive through. We’d get out, park and play in the river. I have 8mm videos of my parents and I floating down the Apple River. I had that converted to DVD. It cost me but that was when I was working. I had a job, a family and a house. I was someone. I’m still someone. When most people think about material things and a job, they think that if you don’t have any of that you’re not someone. I’m still that same person but then again I’m not. I’ve grown; I’ve aged since then. Being homeless can take its toll. When I was in school and the teacher asked me, ‘What are you going to be when you grow up little David?’ I didn’t answer I want to be a homeless man. But here I am.

Losing everything has made me a little more cautious and maybe a little more cynical. My trust level is not there as much as it used to be. I was married for 21 years and I’m a throwaway husband. That’s my fault I know that but I also know it takes two to make a marriage. I was there for my kids, I was there for my job but I forgot my best friend. She’s the mother of my children and I forgot about her. It took its toll to the point where there’s no turning back and I couldn’t repair it. I tried to go to therapy and asked her to come along. She didn’t want to have anything to with it, or me. We divorced in February of 1997.

I had a lot of anger. I moved into a storage shed. I didn’t tell my kids about that but my daughter pieced it together. She was still living in Aims, Iowa and I had moved a bit outside of town. She hitchhiked to where I was living. When I popped the door, there she was sitting in a lawn chair waiting and tapping her fingers. ‘It’s about time,’ she said. I didn’t say anything.

She asked if that was where I was staying and I said yes. Talk about embarrassing. That’s when she started crying. She asked me why I’d been lying to her. I didn’t know how to answer but only to say that I didn’t want her to worry about me.

I didn’t have a choice, financially. I was paying child support and alimony. The mental toll, the divorce and therapy caught up with me at work. It wasn’t because I hit the bottle or did drugs. I drink once in a blue moon. It was my work performance. I wasn’t showing up. I didn’t care so they let me go. Sometime later I found some work back in Aimes. I got on my motorcycle and caught the old Lincoln highway. I came up to a stoplight and there was a bar across the street. Apparently this gentleman wanted his drink so bad that he pulled right out in front of my motorcycle. The last thing I remember is thinking, ‘this is going to hurt.’ I came out of a coma three days later. I was covered head to foot in bruises and full of broken bones. They had to set braces to keep my fingers from locking up into my hands and cutting in my skin. To this day I don’t remember the accident.

What brought you to Boise?

My aunt Tina and uncle Jack lived on a sailboat in Coos Bay, Oregon and I decided to go meet them. Their boat was a 60-foot cutter called Excalibur. It was beautiful. I got to Boise traveling in a car I had. I’d gone through four tires, a water pump and a fuel pump. I had to stop in Boise. I found the Front Street Mission and Labor Ready. I told my aunt and uncle where I was and they told me they’d wait and meet me in Coos Bay. Days and weeks went by and I was finally able to get moving. I didn’t get but a few miles out of Boise when the brake line of my car blew. I stood by the road and yelled. I asked God why because I didn’t know why. I didn’t know there was a rhyme and reason. I hobbled the car back to the Front Street Mission.

I sent my aunt and uncle a message that I’d be coming down. They gave me the dock number and their son Chris’ contact information. I called Chris and he started crying. He told me it was cold the night before. Jack and Tina had turned their boat’s heating system on. It malfunctioned and they asphyxiated in their sleep. The boat caught on fire. It took me a while, standing there and listening, until it occurred to me that I would have been aboard that boat if my brake line didn’t blow. Everything I did to get out of Boise failed. It was out of my power. You get older and you see these little miracles. People say they’re lucky, that wasn’t luck. Luck doesn’t even come into it. It wasn’t my turn.

What are some of the major factors that led you to being un-housed?

Stupidity, the loss of my family and my wife led to poor choices on my part. Like I said, I had a lot of anger and lost my job. My children are grown up. They still live in Iowa. My oldest son has offered to give me a home but that’s his family now. I raised him to be out of the house alone. I could go back to my family but I have a son because I don’t impose my beliefs on him.

I do not impose my problems on my family. I’ll seek their guidance. Sometimes they help me sometimes they don’t. I don’t want to wear out my welcome. If I have to live out in the timber, I’ll do it. They demand that I stay in contact with them. They want to know if I am still alive. I didn’t raise my son to take care of his father. I brought my kids into this world to be self-sufficient and they’re doing well by themselves. I talk to my children and grandkids almost every day.

My days are filled with looking for work. I log on to multiple sites with job postings. I update my resume. Sometimes I get work. When I’m low on physical cash, I’m not afraid to fly a sign. The first time I did that was back in 1989. I ate a lot of crow that day. I made $26. I don’t like to sit there with my hat in my hand and ask for money. I was raised on a farm where we learned to work to earn our way. I did that since I was 12. Working is engrained into me.

What is your dream?

My goal is to provide a roof over my head by myself. I want to get a small sail boat, maybe 26 feet long. I’ve done that kind of work before. I know how to sail. If the jobs don’t pan out I can pull up my anchor move from one marina to another. At the shelter you have to get up at 6 o’clock. You can’t sleep in, not even if you’re sick you can’t sleep in. You have to share a bathroom with a bunch of other people and some don’t care about hygiene. You can’t cook there. There are rules and most of them make sense. If you don’t like it, you’re always welcome to leave. But getting my own place on my own terms would be fantastic.

People should know about the despair. There is a lot of despair but there are also a lot of people who turn that despair into action. They get housing and they’ve moved on. There are others who are die-hard campers. They will move up into the mountains further and further and live there 24/7. My hat is off to them. I wish I knew half as much as they do.

Don’t be afraid to go up to us and talk. Don’t be afraid to offer us a job, whatever that means. You’d be amazed that you’ll get some honest people. We homeless don’t have a lot but what we have, we guard. 9 times out of 10 your property is safer with us than it is with most other people.