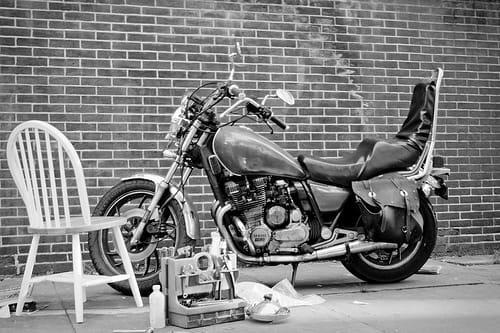 Meeting Tim, I felt as if we could have shaken hands on the showroom floor of any business. He has an easy way about him. Everything with Tim is a soft sell, yet I left wanting to buy more. He cuts straight to the point and as in his words, “when you want to accomplish something, there’s just no other way.”

I was born in Medford Oregon. It’s about the same it is in Boise though Medford is more of a valley. The weather is pretty much the same. It doesn’t have as many people. I grew up in the city but I spent a lot of time in the country because those are the type of things I like to do. I’m an avid hunter and fisherman. I like to go snowmobiling. Oregon fit my lifestyle at that point. I had a mother and father for a number of years. Unfortunately my parents did split when I was fourteen and I supported my mom after that. She was one of those women who believe the mother should stay home with the kids. I did keep a relationship with my dad. It’s been strained at times because we had a lot of differences. That was back in the 60s. My dad remarried and my mom went on. It really didn’t affect me that much. They still lived in the same town. When I was 16 and my parents split I worked at a furniture store. I got a work permit. In 1971 I finished high school and started my motorcycle business.

I sold used motorcycles. I had a repair shop and accessory store. I could do a lot of things. I liked that work, it was very satisfying and the end result was that I was good at it. So I stayed with it. I rode dirt bikes and then all of a sudden people found out I was pretty good at fixing them. When I was young every time my dad wanted to get into his garage, it was filled with dirt bikes. That upset him but it all worked out. My dad and I talked all the time. He just wasn’t in the same house. I never really saw it as a problem. I ran that motorcycle shop from 1971 to 1995 and lost it in a divorce. That changed the dynamics and triggered everything. It was pretty devastating. I continued my motorcycle business in other cities. I moved to Reno and did well until the owner sold the property. Then I came to Boise in ‘96 and the same story. The owner of the property sold. I have three daughters. My dream was to keep my business going and to one day give it to my kids. Working on motorcycles was a hobby for me. I was glad to be able to get paid for it.

What are some of the major factors that led you to being un-housed?

The economy hit me and the businesses I worked for hard. Even trying to apply at McDonalds, they told me that for every one open position, they have sixty to seventy people applying for it. Without places like [Sanctuary], where would people go? They would live out on the streets and I don’t think people want to see that either. People with kids are doing this. Adults can adapt but these kids can’t. I see the kids and my heart bleeds for them. Some adults can’t adapt either. They end up here and especially with the economy peeling back they have nowhere else to go. Thank God for Sanctuary. I’ve applied to many places but even with my experience they won’t hire me. One said that I wouldn’t be easy to get along with being a business owner before. I said I could adapt but they didn’t hire me anyway.

It just all comes back to having a place to go when the chips are down. People really need to feel lucky that they don’t have to come down here. I don’t wish it on anybody but because it’s there and people need it, it definitely needs to continue. [In the past] I had no need for [a homeless shelter] but my wife and I would [donate money] to them. I had no idea years later that I would need to help myself. I try every single day to get out of it but it is a struggle. Until things turn around, and I believe they will, I don’t know what people would do without a place like Sanctuary.

We get up in the morning and I do my hygiene because it’s available. Then I go out and look for work. Sanctuary gives me a bus pass when they can because they know I’m out looking. Since I got here, I’ve gone through five pairs of tennis shoes walking around looking for work. I’m trying to do this on my own and a lot of guys are. With help, it makes it easier and more possible.

It’s very important to me to keep in contact with my daughters. I call them once a week. Sometimes people lend me their phone and they let me talk as long as I need. I have a phone but I don’t have any time on it, but I do have pictures. My daughters are in no position to help, they’ve offered but they don’t make enough money. They live across country and it would take a lot of money to get there. I’ve thought about making a trip out but I’ve taken care of myself for so long. Just like any parent, you don’t want to burden your kids. I imagine if it got really bad my daughters would step in and do something about it. Right now I’m literally holding them off because I want to do this on my own. It’ll happen, just not right now.

I’m educated and have an honorary degree in mechanical engineering from Oregon State University. Still, I’m in this position. I have family [in the Northwest]. My dad is 90 and is on a fixed income and his wife just died. My sister has had some major health problems with her heart and financially there’s no way. I’m just not going to burden her.

Don’t evaluate people on where they live, give them a chance. Let them show you what skills they do possess. I would love to have a group of the people who give come down so that I could say thank you right to their faces. The people that are behind this place need to know that they are not forgotten. We might not be able to stand there and say thank you because they aren’t standing in front of us. Believe me, everyone at Sanctuary is thankful because without it, we wouldn’t have a place to go.